A briefing that will reveal a critical new
development in Dr. Steve Sjuggerud's
"Melt-Up" thesis.

Steve's "Melt-Up" story has changed in a
major way. A new trend he hadn't planned
on just emerged. And he wants to share it
with the readers.

FREE for all Stansberry readers,
with reservation today.

If you've been following Steve's work this year, you're well aware that we're smack in the middle of a stock market "Melt Up."

Melt-Ups happen during the final stage of a bull market — usually the last 12 to 18 months.

It's the grand finale... when the biggest gains are made.

Then, within two years, they doubled again:

The same thing happened during the NASDAQ bubble of the late 1990s. The market more than doubled in about a year: 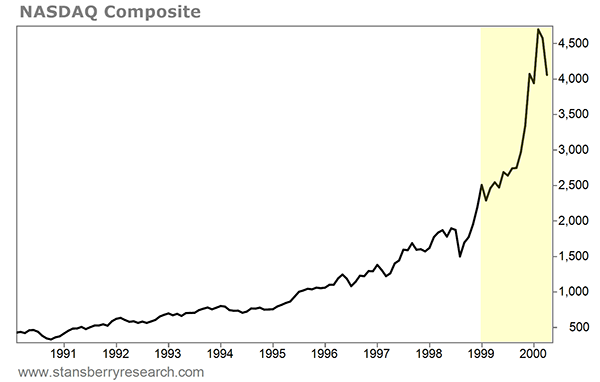 Steve believes we're in the final innings of an entirely new Melt-Up.

And he's urged his readers to take advantage of this opportunity before it's too late.

However, Steve's Melt-Up thesis just changed in a big way.

A new trend he hadn't planned on just emerged.

Steve will announce the details of urgent update to his Melt-Up thesis from our headquarters in Baltimore on the evening of June 29th.

According to Steve, this could be the most critical piece of his Melt-Up investing script you receive.

Porter will be there, too... to weigh in with his own thoughts on this breaking Melt-Up development.

Keep in mind, this is the first and only briefing we've dedicated to Steve's Melt-Up thesis.

It may also be the last.

So whether you've been closely following his Melt-Up script... or you feel like you've missed out on the opportunity — you're not going to want to miss this event.

The event is completely free to attend.

But a reservation is required.

If you'd like to attend, simply enter your email address in the box below to reserve your spot:

Here's why this update is so critical...

During this briefing, Steve is going to:

Again, the discussion will begin at 8PM sharp on June 29th.

If you're interested, reserve your spot now by entering your email address in the box below. You'll receive a confirmation email shortly after, assuring you that we've received your reservation.

For this briefing, we're going to do something we've NEVER done before.

Because Steve and Porter believe it's so critical that every Stansberry reader attends this urgent briefing...

We're giving away FREE digital copies of Steve's newest book, simply for attending the event and listening to his Melt-Up update.

Steve's new book is called The Last Bull Market: How to Make a Fortune on the Biggest Stock Market Bubble in U.S. History and Escape With Your Wealth Intact, Long Before the Crash.

We normally sell this book for $19... but when you show up for this Melt-Up briefing on June 29th, you will receive a digital copy of this book, totally FREE.

This 145-page volume is jam-packed with useful ideas like: 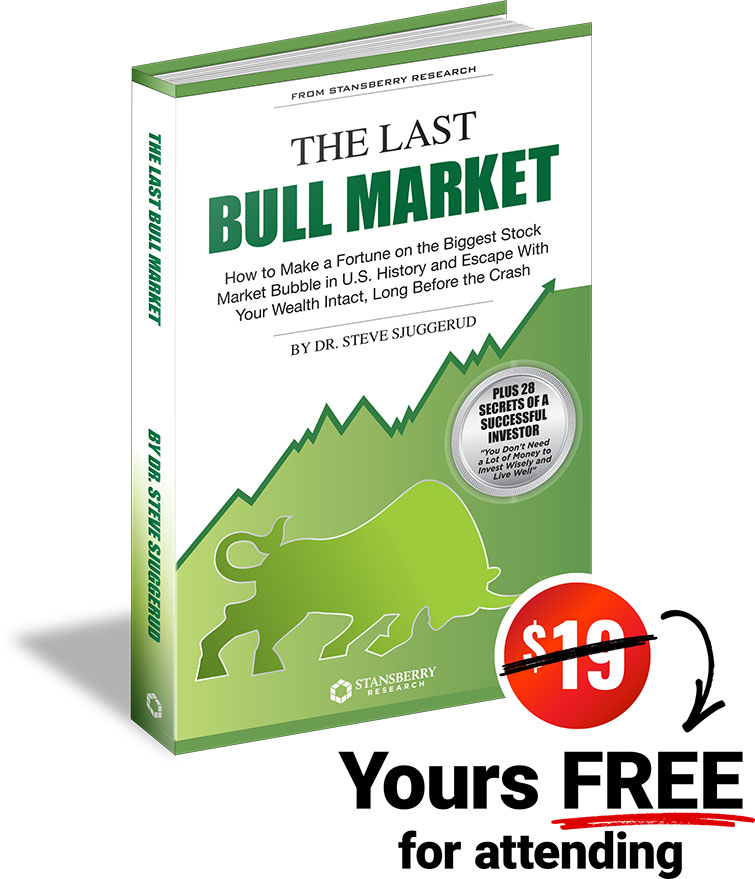 And perhaps most important...

To receive your FREE copy of The Last Bull Market, all you have to do is show up to Steve's Melt-Up briefing on June 29th at 8PM, Eastern Time.

But first, you need to reserve your spot: